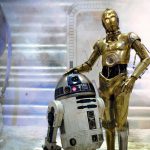 While promoting his autobiography (I Am C-3PO – The Inside Story), Anthony Daniels has shared some interesting information about Star Wars: The Rise of Skywalker, including the filming of Rey and Kylo Ren’s big fight, a scene shared between C-3PO and R2-D2, and other small bits. Daniels was recently in France talking both about The […]

The post Anthony Daniels Discusses ‘The Rise of Skywalker’ Including Rey and Kylo Ren’s Big Fight and a Scene Between C-3PO and R2-D2 appeared first on Star Wars News Net.