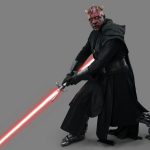 When Solo: A Star Wars Story released earlier this year, fans were excited to see an assortment of deep cuts of lore and Easter eggs from across the Star Wars universe. The most exciting surprise for many fans however was the return of a fan favorite, Ray Park’s former Sith apprentice Darth Maul, even if […]