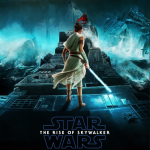 A new thirty-second TV spot has posted via the official Star Wars social media accounts. The clip is a flurry of quick cuts, with a lot of previously seen shots and some new ones sprinkled in. Poe Dameron dominates most of the new footage shown in this clip, as it appears the Resistance […]